Roughly three years ago, Michael Cosgrove junior came across a beautifully handwritten envelope hidden away in a corner of Cosgrove’s shop. It was addressed to his grandfather, Michael Cosgrove senior, and the stamp on the letter instantly drew attention – Gary, Indiana, USA. 1940.

The typed letter inside was from a from a Richard Barrett, a Belmullet (County Mayo) native and with whom it is thought Michael Cosgrove senior spent his youth. Mr Barrett later emigrated to the US and in September of 1940 he visited with cousins of Michael’s in Manchester, New Hampshire where he was shown a photo of Michael with his then young children; Sheila, Maeve, Brendan and Kevin.

This visit and memory from the past appears to have encouraged Mr. Barrett to write to his friend from the past and he composes a letter of warmth and sincerity. It is evident from his words that Mr. Barrett held Michael Cosgrove senior in high regard as a friend from his past and shows concern for the ‘terrible ordeal’ faced by Europe at the time, referring to WW2.

The envelope was addressed very simply to the Erin Restaurant, County Sligo, Ireland. Back in the early days of Michael senior as proprietor, what  we now know as M. Cosgrove and Son was run as the Erin Restaurant, a traditional eating and lodging house with a small shop on the premises. You will also notice the stamp was removed from the envelope and no doubt was added to an on-going collection in the Cosgrove household at the time!

We hope you enjoy the read. 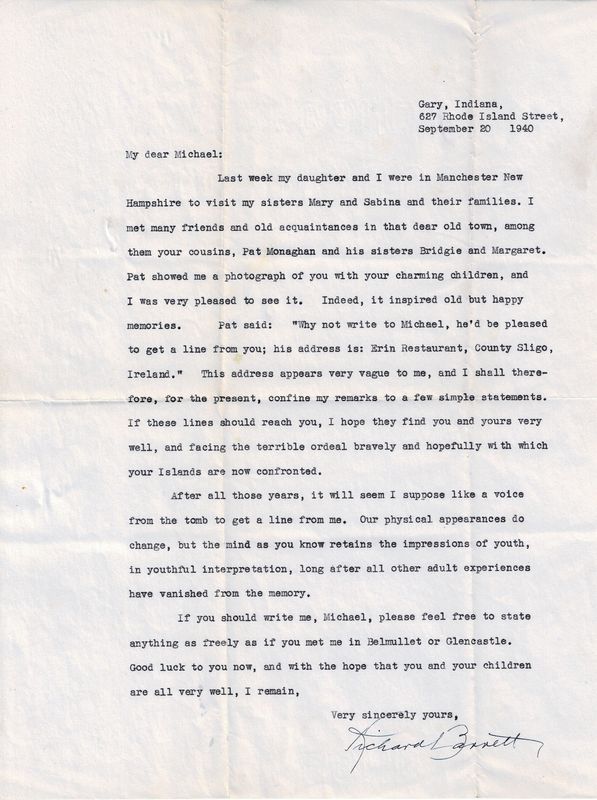